For the past few years, the number of women applying to American business schools has decreased because many women either enter the workforce or take care of their families. Also, top institutions often favor individuals with at least five years of work experience. Meanwhile, AACSB International concluded the proportion of women in U.S. business schools has never exceeded 37 percent in this decade, while the male-female enrollment ratio in law and medical schools is at parity. Despite this, Wellesley College has been well-represented in Wall Street: according to a 2014 LinkedIn study, Wellesley College is a top 10 school in representation there. 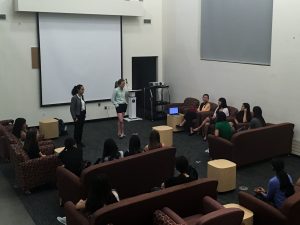 A data set of over 20,000 Wellesley College alumnae since 1960 from The Office of Institutional Research (OIR) found that business consultants and workers represent the third and fifth most common career paths, garnering six and five percent of alumnae, respectively. There has been in particular a rise in the proportion of Wellesley alumnae working as financial analysts and researchers, with OIR reporting an increase from 2-9% from the 1960s to the 2010s. The proportion of other business workers increased slightly from four to five percent in this time period.

According to Dr. Pamela Taylor, assistant provost for institutional planning and assessment at OIR, “A total of 2,466 alumnae worked in business occupations. This figure represented 11.2% of alumnae with occupational information in the Alumnae database as of October 1, 2015. Of these alumnae, almost half (49 percent) graduated from Wellesley in the 1980s and 1990s.” The comparatively low percentages in the 2000s and 2010s reflect the later age at which business schools tend to accept students. 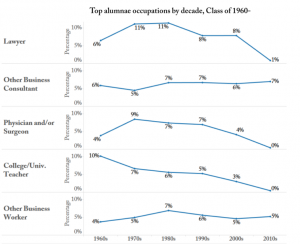 An interesting trend the OIR surveys highlighted is the increasing proportion of Wellesley College graduates entering the workforce in recent years. Economics has been shown to play a role in this: the worst financial crisis since the Great Depression sent many Class of 2009 and 2010 graduates across the country to graduate school as labor markets became more forbidding. In the United States, the Class of 2016 experienced the best job market since the Great Recession, and the high proportion of Wellesley College graduates entering the workplace reflects that. It should be noted that attending graduate school and being in the workplace are not mutually exclusive: many Wellesley students do both in their lifetime.

Wellesley has adapted to the need for women’s college graduates in business. Students wishing to try their hand in business or learn about economics can join Wellesley Women in Business (WWIB), Economics Student Association (ESA), Wellesley to Wall Street and Investment Society (ISOC). ISOC sponsors a yearly trip in early October for students to visit various Wall Street companies. This year, the organization is sending Wellesley College juniors and some sophomores to visit Bank of America Merrill-Lynch with other women’s college students in its New York City headquarters. The footprint of banks and economic consulting companies on campus is also palpable: recruiters from companies including J.P. Morgan Chase & Co., Bank of America Merrill Lynch, HSBC, Bates White and NERA Economic Consulting are hosting events this month that students can register for on Handshake. In addition, Wellesley Career Education has Stephanie Hessler ‘84 as the Career Community Advisor, Consulting, Finance, Business & Entrepreneurship. Students wishing to learn about business career options should schedule an appointment with her on Handshake.

Simone Liano ’17 is the president of WWIB and attributed her involvement in Wellesley business organizations to her interest in the subject.

“The organizations put on a variety of events which are a great way to learn more about different industries, hear about job/internship opportunities and speak with professionals in business,” Liano explained.

Liano noted that many Wellesley women have successfully broken into business from non-economics and mathematics backgrounds, noting the diversity in WWIB’s membership.

“The majority of our executive board is non-economics or math. We have mostly media arts and sciences, political science, neuroscience, biology and psychology majors. I know there are varied majors within our general members as well in areas like computer science, international relations and anthropology,” Liano elaborated.