Senator Elizabeth Warren spoke at President Paula Johnson’s inaugural ceremony on Friday, September 30th and we had the privilege of speaking with her prior to the event. Warren is the current United States Senator for Massachusetts, elected into office on November 6, 2012. Before her tenure, she was a law professor at Harvard and served as the Chair of the Congressional Oversight Panel for the Troubled Asset Relief Program after the economic crisis of 2008. Her multitude of accomplishments has prompted her recognition as one of the most important political figures today.

Q: What are some of the challenges that you have had to overcome to get to your position now? 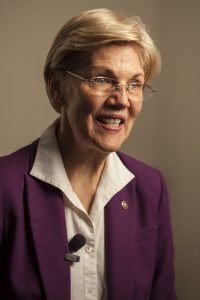 Q: What is one piece of advice that you wish you had in college?

A: Be bold. This is the time to be bold. When I was younger, I kept thinking, “No, I’ve got to get all the pieces in place first”, but step out there. Take the risk. The worst that could happen is that you fall down, but I guarantee that you’ll learn something from that. But you get right back up and try it again.

Q: Do you have any advice for the Wellesley College students who want to follow in your footsteps?

A: Well, we’re expecting a lot from you! We need strong women leaders, and that’s what Wellesley does best. So, get out there, learn what you can, learn to take risks, learn to fail and pick yourself up and get back at it again.