This past Friday Wellesley College formally inaugurated its 14th president, Dr. Paula A. Johnson. Johnson brings with her an extensive background in women’s health and health policy and is the first African American woman to assume the position. Since the announcement of her presidency in February, the campus has been abuzz with excitement. Leading up to the inaugural event, students and alumnae participated in events relating to the theme of Dr. Johnson’s inauguration: Intersections.

On Thursday and Friday of last week, the college hosted several events on campus covering varying topics. One of these anticipated events was the Feminisms Across the Decades panel held in Alumnae Hall on Friday morning. The panel had a large turnout of both students and alumnae. It was moderated by Desiree Rogers ’81 and included alumni from class years ranging from 1950 to 2012.

Students as well as alumnae found the panel insightful about how feminism has changed over the decades and how a Wellesley education influences the way the alumnae think about feminism in the past and future. 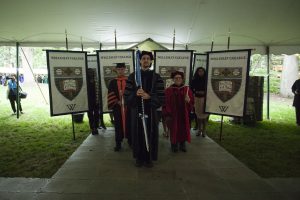 “It’s really nice to hear these women’s coming of age stories. We hear a lot how Wellesley was a place where women can speak their minds. It’s kind of nice to see how times have evolved, and all of these women came from harder times,” Rhea Mehda ’20 said.

Alumnae were also moved by the panel. Michele Oshima ’85 said although she considered some of the answers to questions on relationships to be “a bit heteronormative,” she “appreciated the intergenerational dialogue in terms of people’s location.”

Following the panel was an open house held in the Pendleton Atrium which featured Wellesley Centers for Women and The Albright Institute. Representatives from both organizations were present to offer an overview of their programs and field questions from students, staff and community members.

Albright Institute Director Joanne Murray ’81 expressed her delight with the nature of the ceremony. “We have so much [at Wellesley]. We’re a phenomenal institution and we have a responsibility to share it with the world. Each year we produce hundreds of women who are equipped to be leaders in their fields. How Paula Johnson is launching her inauguration is respectful of that responsibility,” Murray elaborated. Murray subsequently emphasized the importance of the open houses within the ceremony at large. “We have delegates from all over the world here today. Through these open houses we’re able to say that this is the kind of important work that Wellesley College is engaging in.” 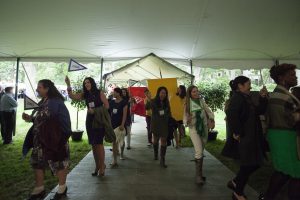 Wellesley Centers For Women Communications Director Donna Tambascio also shared her gratitude for the organization’s place among the inaugural events. “It’s an honor to be invited as one of the programs to be one of the spotlights. It shows that the college views us as a jewel in the crown,” Tambascio commented. She also shared her enthusiasm regarding Johnson’s extensive background in academia, stating that “President Johnson has a true sense of how important research is for driving social change and she has a true commitment to social justice.”

Dr. Layli Maparyan, Executive Director of the Centers, expressed equal enthusiasm for the inauguration. “This is an historic occasion for the College. Paula Johnson’s inauguration comes at a timely moment. She is a great president for who the student body is now, who the alumnae are becoming and the needs of the faculty. She will lead the College in both outstanding and surprising ways.” Maparyan emphasized. “Not only is she strategic, but she is also very skilled. She’s ready to sit down and get going.”

The ceremony took place in a grand tent on Severance Green on Friday afternoon. According to Laura Daignault Gates ’72, Presider of the Ceremony and Chair of the Board of Trustees, over 1,000 alumni attended. Countless students were also present. Prior to the ceremony, a line to enter the venue extended from the path to Clapp Library to The Academic Quad.

Throughout the ceremony, speakers representing multiple bodies offered their congratulations to the student body and Johnson. Highlights included the much anticipated speeches of Senator Elizabeth Warren, Harvard University President Drew Gilpin Faust and Smith College President Kathleen McCartney. Warren spoke of political activism and unity on behalf of the Commonwealth of Massachusetts, urging both staff and students to be aware of each other and the world around them. Faust humorously contrasted the event with the last time a Harvard president welcomed a Wellesley president over a century prior and McCartney warmly welcomed President Johnson into the Seven Sisters.

Over 60 delegates from colleges and universities across the nation were in attendance, as well as alumnae delegates from the Class of 1945 to the Class of 2016. Representatives on behalf of the faculty, administrative, union staff and students each offered their well-wishes to President Johnson, and the College Choir led the audience in the alma mater song. 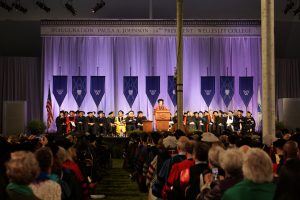 President Johnson’s inaugural speech was well received by the audience assembled. In her speech, she discussed how she plans to incorporate her theme of intersections into her administration as President. In one of her remarks she asked, “How do we unleash the riches embedded in crucial intersections—among people, among ideas, across communities and cultures, through time and space?” She answered her question by explaining three different types of intersections she hopes will emerge at Wellesley: “intersections of academic disciplines, intersections of the liberal arts college with the larger world and the most important intersection of all: how do we unlock the full potential of these synergies?”

Following the ceremony, several events were held around campus, including a reception in the Clapp Library, an Alumnae Reception at The Davis Plaza and a President’s Dinner near The Boathouse. Later in the evening, the college hosted a soiree for current students and alumnae. Wellesley students old and new danced to songs from numerous decades and enjoyed a large arrangement of mocktails. All guests were surprised to see Johnson herself on the dance floor, and throughout the evening many students had the opportunity to dance with her.

Sharon Lu ’20 was one of several students that danced with Johnson. She felt that it reflected the new president’s desire to be a part of the Wellesley community. “She was super open and friendly. It was obvious she wanted everyone to have fun and wasn’t doing it for appearances. She was truly genuine. She is obviously very personable and cares about the students here.” 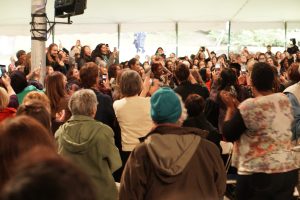 From the commencement of the inaugural activities on Thursday evening to the last minutes of the soiree late Friday night, the anticipatory excitement at the College was tangible. As students, faculty and staff look towards the future, all eyes will hold the President’s Office in their gaze. As Murray stressed, “Paula Johnson has awakened a sense of grand possibility. I think she has a greatness in her vision that will awaken our vision.”