Marilyn Sides is the Chair of the Creative Writing concentration at Wellesley, a program she has pioneered. Animated and forthcoming, her manner radiates the kind of openness that students in these courses need. Most often, even promising students will be arrested by fear of failure or self doubt. For them, “I think the most difficult thing is just to keep writing,” Sides said.

This was the case for Sides herself; even though growing up a voracious reader meant that she always knew she’d wanted to write, it took Sides a long time to actually do it. She was afflicted with the problem she sees in her students – the worry that what she could do would not live up to the standards of her developed taste.

Sides originally comes from Birmingham, Alabama, but grew up mostly in Utah. In both places she lived mostly inside books. She loved most the gothic romances by Eleanor Hibberts — published then under the name “Victoria Holt” — and the Nancy Drew stories. She describes herself as being “real nerdy” in high school and even left early, thanks to the University of Utah’s early admission program.

Sides’ parents supported her college career, but hoped she would major in education so that she could become  a part time teacher and a housewife. They were progressive in that as long as she could pay her own way, they let Sides pick what she wanted to do; nonetheless, they treated her differently than they treated her brothers.

When they were children, Sides’ father encouraged  her brothers to become engineers.

“The joke was on him,” Sides said, as her oldest brother became a “permanent hippie” and the younger switched his college major from engineering to Russian. “If my dad had gotten me years before, I would have become a geologist.”

Sides majored in English instead, and met a professor who would take her under his wing. Some of the advice he gave her was simple: read a paper out loud. But ultimately it was no less valuable than the bigger shows of support he gave Sides, like when he let her into his graduate seminar on biography.

Sides describes herself as having been shy for a long time — not unusual, given her status as bookworm.

“I never talked until college. But then, especially after seeing Hiroshima Mon Amour, what were my two goals in life? To travel, and to have a lot of romances. I figured that not talking was going to get in my way, so I had to start talking,” Sides said. 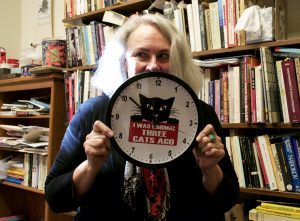 While working in the biography seminar, she met and even talked to a student with whom she’d eventually become involved with through the end of her undergraduate career — a man who would, some-time after she finished with her Bachelor’s degree, fill out an application for the Utah graduate program and ask her to sign it.

Sides was accepted and earned her Master’s degree. When her course was finished, her professors advised her that staying in the same place would make it harder to acquire a teaching position. She found Baltimore more comfortable because of its similarities to the South, so she started at the PhD program at Johns Hopkins. There she studied a humanities course that offered an interdisciplinary curriculum and a trip to Europe.

When she finished her program at Johns Hopkins, Sides was reluctant to put herself on the job market — but contacts she’d made at Hopkins knew that a position had fallen through in the middle of the year at Wellesley and recommended her for the job.

Since then, Sides has been here, teaching courses in both literary study and creative writing workshops. She strongly advocates for women’s centered institutions.

“Wellesley should stay a women’s college forever. It makes a huge difference, still. I have so many students who come back and say, ‘When you get out, you all of a sudden see what the deal is,’” Sides said.

One story from a winter she spent teaching at the Associated Kyoto Program captures how relevant these benefits are. After a few days of classes, some of Sides’ students from Smith approached her to ask whether she saw the same things they did – “The women who went to co-ed schools wouldn’t talk. They would defer to the guys.”

Sides learned early not to waste any time being dismissed. She was taught by small formative moments like seeing her mentor — the one who’d told her she was his best student — only take male students out to lunch at the faculty club where Sides was a waitress. “I was really aggressive once I learned that that’s how it worked.”

She decided not to let herself be sidelined. “Even in graduate school, there weren’t a lot of women. The guys were tough — and they didn’t like being argued back. So you learned that you have to learn to interrupt, because you know they’ll interrupt you,” Sides said.

She calls herself aggressive, and she is, but Sides’ words come wrapped in a smile of real warmth; it’s the smile of a woman who’s learned how to get the last laugh.