On Tuesday Nov 8, Wellesley College gathered to watch the 2016 Presidential election as a community. Alumnae, students, faculty, and visitors flooded to campus for the historic night.

In order to celebrate this historic moment as a community, there were two major events hosted on campus. Wellesley Committee for Political and Legislative Awareness (CPLA), along with the Agora Society, Wellesley College Democrats and Wellesley Republicans, held their traditional Election Night viewing event. CPLA took an active role in this year’s election, holding non-partisan debate watch parties and voter registration events throughout the semester.

“After a year and half of campaigning, the elections will be over and CPLA wants create a space where everyone can come together, no matter who they supported and campaigned for and voted for since April 2015,” said Zoe Iacovino ’17, the current chair of CPLA.

CPLA’s watch party was held in Tishman Commons. Though the event catered to current Wellesley students, students from other schools were welcome to attend at a $5 charge. The event had various activities including photo booths, music, food, and a $500 tab at Punch’s Alley. A large screen in the front of the room played CNN’s live coverage as the polls in each state closed. Iacovino says that CPLA hoped to create “ a fun and festive atmosphere where people can let go of the anxiety this election has brought on and celebrate with their friends and classmates.” Other broadcast stations were shown in other rooms throughout the campus center, including Fox News in the Pool Room and MSNBC in Lulu 210.

The College, alumnae association, and other departments planned a separate viewing event in the Keohane Sports Center open to all. The viewing party had to be moved from its original location in Alumnae Hall to the Keohane Sports Center to accommodate the thousands of anticipated visitors. Around 2000 alumnae, students, faculty, and friends filled the center, which was festively decorated for the historic night. The watch party officially commenced at 8 p.m. and was scheduled to end at 1 a.m.

This event featured a patriotically decorated Field House as well as Wellesley-related social media, faculty talks, selfie photos stands with cut outs of both candidates. In addition there were Story Corps, so attendees could record their own stories as well as watch previous Wellesley stories.

“Wellesley alumnae, regardless of political persuasion, are proud that our alma mater has produced the first major political party candidate for the office of President of the United States.” said Missy Shea ‘89 and Executive Director of the Alumnae Association.

The large attendance was a challenge to both CPLA and the Alumnae Association. Iacovino ‘17, Chair of CPLA said, “This event is bigger than any event CPLA has ever organized. The location shift and high interest in the election has pushed us to get creative, think big and make the Election Night Party even more of a party than it has ever been”.

The excitement and festive atmosphere of both watch parties were felt by all. There were celebratory cardboard cutouts, glass ceiling themed cupcakes and decorative buttons. A large screen at the front of the Field House projected CNN’s live coverage of the events, as well as clips of motivational speeches given by notable alumni. Diana Chapman Walsh ’66 and Madeline Albright ‘59, skyped in to extend their greetings. President Johnson, who was also in attendance, spoke words of encouragement and hope to both watch parties in Tishman and the Field House. 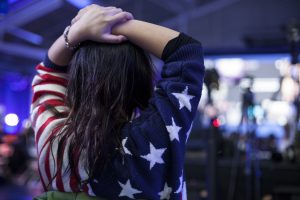 As CNN continued reporting its numbers; however, the atmosphere changed considerably. The attendees, a majority of which were sporting Hillary gear, began to show ambivalence and uneasiness at the polls.

Carmen Danielson ’97 stood with a group of fellow classmates who all declined to make a statement. She commented, “I’m beginning to get very worried. I’m glad that she’s won some support in the swing states, but I’m starting to realize the potential of Trump’s presidency. I plan to stay here as long as I can to show my support, but I feel anxious and upset at the way this is turning out.”

Once Trump began winning Pennsylvania, Florida, and Michigan, nearly half of the Keohane Sports Center emptied out. Students and alumnae started showing an emotionally visceral reaction to the results. Women embraced each other, others sat on the ground, others watched with tears in their eyes.

An anonymous first-year student commented, “I want to believe that there’s still a chance. I’m holding onto this idealistic hope that good will can trump hatred. But never in my wildest imagination could I have expected that the numbers would come in like this. Never.”

Tanekwah Hinds ’15, works for an LGBT healthcare, research, and advocacy organization in Boston. She expressed her uncertainty both as an African American woman and one who works with federal funding, “I just don’t understand how people can support Trump and everything he stands for: xenophobia, racism, misogyny, bigotry, the list continues. I think I just lost a lot of faith in the voters. I look towards the future with uncertainty at this point, and wonder what the next steps are going to be.”

After the Field House watch party ended, students crowded in Tishman to watch the final moments of the night. A range of emotions, from anger to sadness to pure exhaustion overwhelmed the majority.

On Wednesday morning at 11 a.m., Hillary Clinton made her concession speech to Donald Trump. She extended her congratulations to Trump, thanked her supporters, and emphasized the work that needs to be done in the United States. She poignantly stated, “I know we have still not shattered that highest and hardest glass ceiling, but someday, someone will, and hopefully sooner than we might think right now.”

Despite seeming visibly upset, Clinton’s speech was lacking any bitterness towards the results and centered around progress and hope: “To all the little girls who are watching this, never doubt that you are valuable and powerful and deserving of every chance and opportunity in the world to pursue and to achieve your own dreams.”

In light of the circumstances, Wellesley College students shared an email template to send to professors in the case of absences due to emotional toil. Residential halls, academic departments, and various organizations offered spaces to gather and moments to spend as a community to promote a healthy, supportive environment for all students. Students expressed their solidarity with Clinton, shock at election results and support as a community through email and social media. However, reports of inflammatory statements and actions prompted the police department to issue a statement warning students for their safety. President Johnson, as well as College Government sent out words of solidarity and urged us to maintain a safe, supportive environment despite any differences.