This past Thursday, Raíz, The Wellesley Asian Alliance, Wellesley Students for Justice in Palestine, Wellesley’s African Students Association and Babson’s Origins of Necessary Equality held a rally titled “Reclaim and Resist” to publicly respond to the controversial immigration ban executive order signed by Donald Trump and to encourage the Wellesley community to stand in solidarity with those affected. The rally was held in the Academic Quad at 12:30 p.m. The rally’s Facebook page boasts that 140 people were in attendance including students, faculty, staff and Wellesley College President Paula Johnson.

According to the Facebook event, the goal of the rally was to encourage the Wellesley community to make their own personal spaces, such as dorms and offices, a sanctuary for community members affected by the legislative actions of Donald Trump. The rally also aimed to be a space for members of the community to speak about their own experience of immigration policy if they were willing.

Co-founders of Raíz Maria-Alejandra Jaramillo ’18 and Gloria Sanchez ’17 felt that the rally was needed given Trump’s discriminatory actions in office and the need for action on campus. 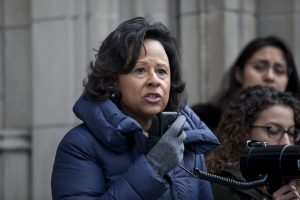 “Raíz held this rally in response to the fear felt by many in our community following Trump’s executive orders on immigration and the need for action. We were also frustrated at the lack of urgency felt on campus,” said the co-founders in a joint statement.

Gaby Varela ’20 was one of the speakers at the rally and is an active member of Raíz. She felt it was important to speak about issues faced by the undocumented community and to make the campus aware of these problems.

“First and foremost, I wanted to give a voice to those in my community who have been directly affected by issues surrounding immigration. I wanted to make their presence known and heard on this campus,” Varela said.

Varela also found it important to mobilize the Wellesley community to act in solidarity  and take action against policies that harm undocumented and Muslim members of the community.

“It [Varela’s speech] was meant to be a call for action from everyone and hold everyone accountable. I wanted everyone present in that rally to know that we can’t remain silent, we don’t and never had the excuse of not having time,  and we need to use everything in our power to create change in our Wellesley College community and abroad,” Varela commented.

Since the election of Trump, there has been pressure for colleges across the nation to declare themselves “sanctuary campuses.” This means that the College will not cooperate with Immigration and Customs Enforcement (ICE) or any other agency attempting to apprehend undocumented individuals. In December of last year, President Johnson’s administration decided not to name Wellesley a sanctuary campus citing a lack of definition for the term in her letter to the community. 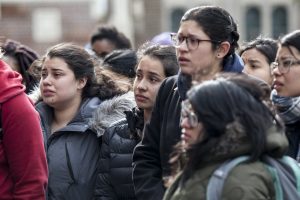 The decision was met with controversy by the community, and students such as Madeline Wood ’19 feel that the college isn’t doing enough and should be doing more to support vulnerable students, faculty and staff.

Natália Marques ’19, a spectator on Thursday, was glad that students were able to voice their opinion on the term sanctuary.

“I loved to see the administration challenged on their policies, I know it must have been pretty disheartening for a lot of students to hear the sanctuary campus decision right at the very end of the semester, so it couldn’t be properly addressed. I’m glad the rally gave students the power to address it,” Marques said.

Raíz is still committed to declaring Wellesley a sanctuary campus and hopes that the rally prompted the community into action to support those affected by U.S. immigration policy.

“Our position on adopting the term sanctuary has not changed. We would also like Wellesley College to follow in the footsteps of institutions such as Dartmouth and U.C. Berkeley that provide thorough support for undocumented students,” Jaramillo and Sanchez said.

Dartmouth University has an Office of Visa and Immigration Services which is tasked with providing resources, support and legal counsel for undocumented students on their campus. The office’s website provides links to legal services as well as advocacy groups in the area of Dartmouth.

The University of California at Berkeley has an Undocumented Students Program which provides students with resources to assist them in navigating financial aid, legal counsel and life at the college.

Varela believes that making the campus a sanctuary is only the beginning, and that the term sanctuary must go beyond the college and be a part of people’s personal lives. 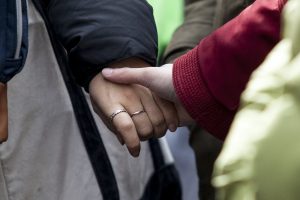 “To me, sanctuary campus is the first step. It’s more than just a political statement. Sanctuary campus would mean that we are all on the same page and we will use any privilege we have to protect individuals, regardless of their immigration status, religion, national identity, sexual orientation, gender, race etc.,” Varela said.

This semester, Raíz will be volunteering with schools in the Boston area and hosting more events on campus for students, faculty and staff to attend.

“As of now, we are planning to volunteer at Rafael Hernandez School, a K-8 public school in Roxbury. During lunch, we also want to organize talk backs on topics like immigration, education, other movements etc. and invite professors to join,” Varela commented.

Raiz will be holding an open meeting this Thursday at 8 p.m. in the Multifaith Center. Students such as Madeline Wood are mobilized to take action in defense of those targeted by Donald Trump’s rhetoric.

“I do plan on going to the meeting on Thursday night at 8 p.m. in the Multifaith Chapel to show that I’m not just here to listen, but to act. If anything the rally made sure we knew that these are urgent, human issues that need to be addressed by action on the part of not just the administration, but other students,” commented Wood.