At Senate on March 20, senators approved a ballot question that will decide whether or not the College Government Cabinet (CGC) should receive compensation for its work. The question will appear on the upcoming 2017 College Government Ballot. According to the Senate minutes, the funds for compensation would be allocated through the Student Activities Fund (SAF) and would use an estimated 3.5 percent of it. The measure would not take effect until the 2019-2020 school year.

Jessica Shin ’18, who has helped lead the initiative since the beginning of the school year, explained that the question of compensation is one that has been explored throughout the year and that the process of making definitive measures for the ballot has been a result of campus engagement.

“There were two main goals that we sought to accomplish before Senate voted on our Ballot Question to be on this year’s ballot. During the fall semester, Emma [Brewer-Wallin ’18, another leader of the initiative], along with members of SLAP and Senate, worked on an initial proposal after receiving feedback brought to Senate. This semester, we continued to reach out to students by having four open feedback meetings to ask students how they felt about using the Student Activities Fund to compensate CG Cabinet members and also to spread awareness and information on our proposal,” she said.

Shin also noted that she and other leaders of the initiative met with CG Cabinet members, both current and former, and the Office of Student Involvement to ensure the feasibility of this measure.

“The second goal was to speak to major stakeholders, [those] being administrators, CG Cabinet and Senate. We wanted to ensure that the proposal was not only desirable, but also realistic in terms of logistics, funding and sustainability,” she explained.

Rose Whitlock ’18, another student leading the initiative, commented that there is still a lot of work to be done should the student body vote to implement compensation. 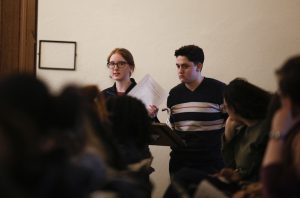 “If our proposal is passed by the student body, the next steps will be to continue to work with the Office of Student Involvement and the Payroll Office to make sure that cabinet compensation is awarded to the 2019-2020 cabinet in a way that complies with federal payroll guidelines. We would also be continuing to work with SPEC [Senate Policy and Ethics Committee] and the Office of Student Involvement to ensure that the CG cabinet compensation line item is overseen year-to-year by a body other than the CG cabinet,” she stated.

Whitlock further explained that a past experience, where a lack of compensation had prevented her from becoming student bursar, is part of what drew her to the proposal.

“As someone who has had to sacrifice a cabinet position due to financial need, the passage of this measure is incredibly important to me personally. No student should ever have to face the situation I found myself in during last year’s CG elections. No student should have to step back from a position that she cares deeply about, that she knows herself to be qualified to hold, that would allow her to give back to her community, that she campaigned unopposed to hold, because of financial need,” she said.

Through this experience, Whitlock began to conclude that CG cabinet compensation would be beneficial for the entire student body because CG members are the ones who formally connect the administration and faculty to the student body. It would also increase accessibility to CG for students who need to work.

“I truly believe our entire campus community would benefit from having these cabinet positions available to the most qualified and passionate students, not just those who can afford it. As an institution and a community we value service. ‘Non ministrari sed ministrare.’ What we don’t acknowledge is the toll that service takes on our highest student leaders, and it’s a toll that ripples through our entire college government body. Without taking steps to compensate CG cabinet, I honestly don’t think our College Government is a sustainable institution. And that’s alarming to me, because CG is our body, the body through which we can most formally organize and address our administration and faculty,” Whitlock said.

Some students have raised concerns about compensating CG cabinet members when other leaders of organizations do not receive pay. Dana Fein-Schaffer ’19, an e-board member of Active Minds, a mental health organization on campus, explained that in her opinion, CG cabinet should only be compensated if it can be proven that they do a substantially greater amount of work than other organizations.

“I think that CG should only be compensated if they are putting in more time than people in other leadership positions, and thus, I don’t think other orgs should be compensated if that is the case. However, if the time requirement for CG members is about the same as that of e-board members of other orgs, then I do not think it’s fair if CG council is compensated while other orgs are not,” Fein-Schaffer explained.

In response to the question of why CG cabinet deserves compensation, Shin detailed a few of the responsibilities that cabinet members have.

“Besides their weekly meetings, being the President of their respective Committee, serving on Senate and serving as a Cabinet Member, these Cabinet Members are representatives of the student body and liaise our needs and concerns to the administration and faculty. Similar to RAs and HPs, part of their duties is that they are accessible to their constituents and respond to events and issues that pertain to the Wellesley community, which encompasses so much more beyond our physical campus space,” she stated.

“Furthermore, they serve the entire school by fulfilling an administrative role, and most importantly, by fulfilling an administrative role as a representative of student concerns and interests. They work closely with committees, offices and administrators to which most Wellesley students do not have such immediate or intimate access, and they do important work for these administrators that would otherwise be assigned and completed by a hired staff member,” she said.

Shin explained that the compensation of CG cabinet members would not preclude other organizations from petitioning for compensation.

“I’d like to say that by asking for CG Cabinet Members to be compensated, we are not suggesting that other student leadership positions are not as important. Our goal and this Ballot Question are designed to just look at compensating College Government cabinet based on their work and the importance of diverse representatives at the highest form of student government. If next year, students wish to compensate other positions on campus, then they can follow similar steps and allocate a specific percentage of the SAF through a ballot question posed to the student body,” she stated.

Fein-Schaffer is not opposed to CG cabinet compensation, but thinks that if they are ultimately granted payment, they should then be held to a high standard.

“. . . if they are compensated, I feel that there must be a way to hold them accountable. They should only be compensated if they are actively taking part in their role in CG and accomplishing what they are supposed to be doing,” she said.