Knafel Assistant Professor of Humanities and Assistant Professor of Classical Studies Liz Young is a living index of classical texts. She is a distinctly contemplative figure, able to rattle off lines of Latin from memory or cross-reference passages in her head. Her office is homey, with volumes of Roman epics outlining the shelves. Ask her a question about classical influence, and in a moment she will have drawn up a robust bibliography of the ancient world.

Beyond her mastery of the literature, Young also displays a contagious passion for her subject, one which inspires her students to achieve more in their classes. From the beginning of the semester, her priority is to foster an enthusiasm for the subject matter in her students. She is a dynamic figure, often darting around the classroom on the hunt for new ideas and theories. Young explained that her zeal for language presented itself at an early age.

However, her pathway to professorship was hardly linear. She continued, “In college, at Columbia, I was a Classics major, but I had become completely fed up with Classics by the end of my time there. I felt like I spent most of my time looking up words in massive dictionaries, rather than thinking in depth about the texts I was reading or anything else for that matter.”

At the same time, Young always knew that she wanted to pursue a career in academia because she was passionate about learning, reading and writing. As a result, she decided to apply to comparative literature programs with the intention of transferring into what she saw as a “more vibrant, challenging and forward thinking field.”

Eventually, after meeting the classicists at the University of California, Berkeley, Young realized that Classics needed intellectual, progressive people because “it was so far behind other literary disciplines in its thinking.”

The combination of her passions eventually culminated in the creation of her own course at Wellesley, Literature on the Brain: Introduction to Cognitive Poetics, which is a popular class like many of the other courses Young teaches. Young’s love of classical studies does not come without reservations, as she will readily acknowledge:

“I do think that Classics as a discipline needs to face up to its own elitist, discriminatory history, and think about whether and how the study of Greco-Roman antiquity can respond to the needs, investments and backgrounds of a modern student body at a school like Wellesley.”

Beloved by students, Young is known for her compassion as a professor. She is characterized as uniquely kind and gifted in that regard, willing to engage any topic of conversation, no matter how obscure or esoteric. Each discussion with her is imbued with a sense of familiarity. 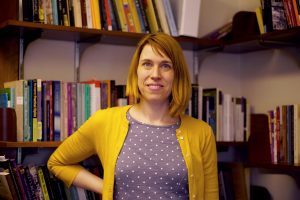 As she notes, “What I enjoy most in my teaching is the process of collective discovery that ensues when a group of smart, creative people start engaging in an interpretive conversation together about a text. The results are entirely unpredictable, and often wonderful. I find this process of collective interpretation in the classroom more energizing than almost anything else I can think of, except maybe coffee.”

Austen Aquino ’17 finds this engagement empowering, describing Professor Young as an academic who treats her students as intellectual equals.

“Whenever I have participated in scholarly discussions with her, I get the sense that she finds my ideas to be interesting thoughts of another classicist, of a peer. She does amazing things for your confidence,” said Aquino.

Even in a field as ancient as the classics, Young believes there is much progress to be made. She believes that Wellesley is the perfect place to foster such change.

“I love teaching Latin in a classroom that draws students from so many different backgrounds—to me, this is one of the most exciting things about teaching Latin here. Classics has been a notoriously white, male, aristocratic field. But not a single person in a Wellesley Latin classroom is a white, cis male aristocrat! This means that every single person is positioned to challenge received ideas about the Greco-Roman past—and to discover new and potentially unorthodox reasons for studying the Classics today,” she said.

Her perspectives often dictate the coursework she assigns. Aquino explained, “The secondary literature, and criticisms that Professor Young assigns to complement our Latin translation work, and the discussions that arise from those readings are some of the most fascinating and rewarding that I’ve had the pleasure of partaking in throughout my whole Wellesley career. She pushes her students’ thinking about certain texts, and helps demonstrate that there can be a place for women and minority thought in the traditionally white, male field of classics.” Aquino also added that she would have never become a classical civilizations major without Young’s guidance.

This sentiment is echoed by other students. Lauren Mostrom ’18 agrees that “Liz has been an incredible professor, and has given life to our studies of the Classics. No one else is able to tie the Classics to the modern world quite like her.”

Next year, Young will be moving to Vassar College to continue her teaching career. She admitted that leaving Wellesley will not be easy.

“There is nothing more motivating for a professor than having students who bring as much energy, commitment and creativity into the classroom as she does—and that is certainly the case here at Wellesley,” she said.

As she departs for New York, Young wishes to remind her students of three things: “Spend as much time as possible learning and doing things you love, take at least a couple classes in a field you know nothing about, and remember that all work and no play makes Wendy dull and grumpy!”