Environmental Action (EnAct), a student organization at Wellesley dedicated to promoting sustainability and environmental awareness, is attempting to bring the Green Revolving Fund (GRF) back to Wellesley.

Ella Mullikin ’20, a member of EnAct and a leader of the initiative, explained that the GRF was brought to Wellesley in 2014, but investors declined to divest.

“In 2014, Wellesley students led a divestment movement that traveled all the way to the Board of Trustees. The Trustees and President Bottomly decided not to divest but promised the students other sustainable initiatives instead; one of the most important [initiatives] was the creation of the Green Revolving Fund or similar fund for sustainable projects. A pilot of the GRF was launched with $500,000 — however, the Office of Sustainability only spent $180,000 before the fund was frozen without notice or explanation. This is the current state of the GRF,” she explained.

Mullikin explained the environmental benefits that the GRF would bring to campus.

“The Green Revolving Fund was, and would be, money available to the Office of Sustainability, specifically to finance projects that reduce Wellesley’s greenhouse gas emissions and increase energy efficiency. An initial investment is made into the fund, and the cost-savings from the greater energy efficiency created by the projects is used to perpetuate and grow the fund — hence ‘revolving,’” she said.

Hazel Leung ’19, another leader of the initiative, explained that the idea to bring the GRF back came from a class project.

“Ella Mullikin, Anya Sheldon [’20] and Jess Ostfeld [’20] in Beth DeSombre’s First Year Seminar, ES 104: How To Save The Planet, initially brought it up as part of their final project on community organizing. They actually first brought it to the wider community’s attention and laid the groundwork for EnAct’s GRF campaign right now,” Leung commented.

In order to gather support for the GRF, members of EnAct and other concerned students have organized astudent petition to deliver to the administration. Nathalie Bolduc ’19, the founder and president of EnAct, explained the importance of the petition. 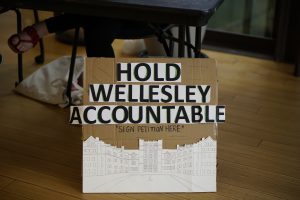 Mullikin added that the petition is important because it will help get the attention of the Board of Trustees.

“The petition is for a letter that will be brought to the Board of Trustees, calling for them to reimplement the GRF. We want the Trustees to know that the student body as a whole is concerned about accountability of college administration and about sustainability at Wellesley,” she said.

Bolduc also explained the other measures that EnAct is taking to promote the GRF.

“EnAct started a poster campaign at the beginning of the semester. We spoke at Senate, we hosted multiple teas around the issue and we’re tabling in Lulu twice a week,” she said.

Bolduc believes that the GRF is important not only for the benefits that it will bring to Wellesley in terms of environmental stability, but also because it will prove that the college administration can be held accountable for its promises.

“It is important to the school for three reasons: first, because reinstating it would show that the administration actually follows through on its promises to students; second, because of its ability to institute environmentally and economically beneficial practices; lastly, to demonstrate to the wider community – alums, potential donors, prospective students, etc. – that Wellesley cares about its impact and is committed to doing its part to protect the earth for future generations of Wellesley students and world citizens,” she explained.

Mullikin added that the GRF shows the administration how important the environment is to Wellesley students.

“Personally, I am a first-year frustrated by Wellesley’s lack of commitment, and I not only want any additional funding possible for sustainability, but I want the college administration to know that the environment is something that matters deeply to students and that we will keep them to their word,” she stated.