On Wednesday, May 3, Wellesley’s Academic Council will vote on the future of shadow grading at Wellesley College.

The Council, which is composed of multiple committees and addresses academic issues at Wellesley, voted to adopt the shadow grading policy on December 11, 2013 and implemented it in the fall of 2014 for a four-year test period. According to a recently-released report from the Office of Institutional Research (OIR), one reason for its adoption was to respond to findings that Wellesley students were extremely focused on their grades, more so than other female college students. The report goes on to detail the five goals of the policy, which were to allow first years to learn about Wellesley’s standards for academic achievement, to encourage students to explore new subjects and areas, to refocus student attention from grades to intellectual engagement and inspiration, to help students learn to manage time and balance their lives and to reflect Wellesley’s commitment to a liberal arts education.

The OIR report assesses the shadow grading policy using both qualitative and quantitative data, which was gathered using surveys and multiple focus groups with students and faculty over the past three years. This research reveals that the policy’s goals have only been partially met, and shadow grading has received mixed reviews from faculty and students.

One of the main concerns faculty have is whether the policy actually encourages students to explore the curriculum or whether it encourages them to take classes that they anticipate receiving lower grades in. In addition, this approach has had the unintended consequence of students taking classes in STEM fields, which they consider more difficult, and has thus funneled students away from the humanities and social sciences.

Megumi Murakami ’20, the former College Government Secretary-Treasurer, has had multiple conversations with administrators and faculty about shadow grading and has seen this lack of equal movement between the humanities and STEM.

Psychology Professor Beth Hennessey also worries about the message that shadow grading may be sending to incoming first-year students.

“If you’re an incoming student, and you’re told all the courses in the first semester are shadow graded, what might be some of the underlying takeaway messages? ‘Wow, Wellesley College is incredibly difficult.’ We don’t think that you can cut it or that you’re ready. I think that’s a dangerous message,” she explained. 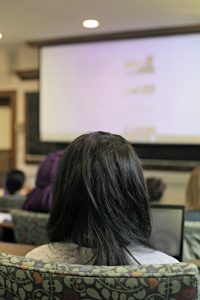 Finally, course data analysis also shows that shadow grading leads to poor preparation in language courses and other sequenced courses, since a D is needed to pass a shadow  graded course but may not be sufficient to move on to more difficult areas of study.

While these are only a few of many critiques of shadow grading, there are also multiple aspects of shadow grading that are beneficial. For example, the vast majority of students that were assessed during the student surveys and focus groups report that the policy made their transition to college less stressful and encouraged them to take classes that they would not have otherwise enrolled in. Many tried difficult courses or those in areas they had not explored before. Students often felt encouraged to learn for the sake of learning. In that respect, the OIR report states, shadow grading fully meets its goal.

“I think that shadow grading is really important because in your first semester of college, you’re adjusting to so many things like living away from your family for the first time for most people, being in a new community, trying to make friends, trying to get adjusted to the weather. And your academics are what’s important, but first you need to build your support system, and shadow grading allows you to worry less about your academics in your first semester so that you can build your support system,” she said.

In addition, the OIR’s report has found that shadow grading helped students become more organized and ready to take on the rest of college because they had a better idea of what was expected of them. It also led students to spend more time on their extracurricular and recreational activities than they did in other semesters.

Murakami agrees that the current policy needs to be altered in some way.

“We now need to revise the system to tailor the outcomes to the incentive to explore, try something new, be challenged, learn how to study. This may require an entirely new program,” she stated.

Hennessey, who voted against shadow grading when it was first proposed, believes that the policy should stay in place for another few years so that its full effect can be accurately assessed. However, she stressed that the biggest change that must occur is more conversation among students, faculty and administrators.

“We should try to get a handle on how the shadow grading policy has impacted their [students’] experience at Wellesley and the way they think about grades. Also, my impression is that the first year or two we had shadow grading, for whatever reason, there was a lot more direct discussion about it. But now that we’re more used to it, perhaps incoming students didn’t get as much information about it. I think that’s a mistake. Students, whatever the year they are at Wellesley, need a lot of conversation with administrators, deans and faculty as to why this policy came about in the first place. I just believe there’s been lack of conversation,” she said.

The Committee on Curriculum and Academic Policy advised the college to discontinue shadow grading and to consider other policies instead. In addition, the OIR report mentioned that shadow grading is not the only academic problem that Wellesley must grapple with. The achievement gap, resources for students coping with mental health issues, support for faculty advising and misconceptions about the grading policy among students and faculty were also listed.

Furthermore, Hennessey discussed the intense focus that many Wellesley students have on their grades and GPAs. She believes it to be worse than that of students at similar institutions and thinks the college should address this phenomenon.

“There’s lot of literature supporting or saying that women much more than men tend to define themselves in terms of their grades and GPAs, etc. I see it in a lot of my students. To really start confusing your worth as a person, your success as person, with whether you got an A or A- or B in some courses at Wellesley College, that’s a really dangerous road to go down. And I fear that a lot of Wellesley students are going down that road,” she said.