On Monday, May 1, Wellesley’s immigration rights group, Raiz, hosted a strike with other organizations on campus in support of the nationwide “A Day Without Immigrants Strike.” The organizers urged students to not purchase anything and to not attend class or work in solidarity with those acutely affected by immigrant injustice.

“By striking, we will join Movimiento Cosecha, Fight For $15, Food Chain Workers Alliance, SEIU United Workers West and other unions and movements as they unite to make it clear that this country cannot function without immigrants. They build confidence that through non- cooperation, we can force this country to recognize immigrants and realize that it depends on them,” Raiz’s Facebook page for the event reads.

On the Facebook event page, 118 people committed to attending. At the rally itself, students, faculty and staff came to march in support. Demonstrators marched through Wellesley’s campus and down Washington Street to Morton Park, where various speakers shared personal experiences as well as calls to action.

Ashley Parra ’19 explained that she decided to strike because she is sympathetic to the immigrant cause and felt compelled to support her immigrant family members and their sacrifices in coming to this country.

“I’m here because my father was a Mexican immigrant, he’s a citizen now. My grandparents are all immigrants. My grandfather was actually a professional baseball player in México. He left that profession, this very famous profession, to come and work in a factory in the United States because he knew that this country was better for his children,” Parra said.

Throughout the week, students voiced the importance of Wellesley students not going to class in support of the strikers. Natalia Marquez ’19, a general member of Raiz, wrote a piece for the online platform called The Tempest, which stressed the importance of student activism and the impact that it can have on social justice issues.

“This strike is the biggest thing you can do, in your immediate area, and it will be for a long time. It’s nationwide, it’s mass mobilization taking place right now. If you decide not to strike, I want you to really ask yourself why, is whatever you were doing worth it, and ask yourself how you can do better in terms of supporting others next time around,” Marques explained when asked about the importance of striking. 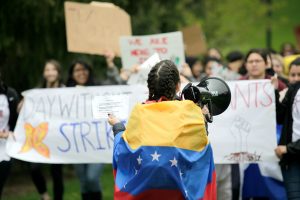 Raíz hosted a strike in solidarity with those affected by immigrant injustice. Photo by Audrey Stevens ’17, Photo Editor

The goal of the demonstration was to shut down business as usual at Wellesley.

“We want empty classrooms. We want campus to shut down. That will be hard, but it’s by no means impossible,” said Marques.

Incoming Multicultural Affairs Coordinator (MAC) Dina Al-Zu’bi ’19 believes that it is important for students to use their privilege and strike in solidarity with immigrants who have contributed to the success of our education. For example, immigrants are a part of the student body, faculty and staff at the College. Students study the work of immigrants, learn from their experiences and benefit from this knowledge. Therefore, Al-Zu’bi believes that students should be willing to use their privilege to fight for those who have less and have contributed to their own success.

“The irony in saying we can show up to class and learn about them, we can gain the satisfaction and the appraisal of writing about their work and their lives, yet we refuse to acknowledge them for a day by disrupting our own,” Al-Zu’bi commented.

“I’m really hoping to work a lot with not only students but faculty and administration to see what can we do and how we can put actions behind intentions and words that we’re trying to do,” Al-Zu’bi said. 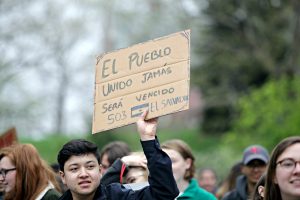 Students who have the ability to give are encouraged to donate to an emergency fund by Movimiento Cosecha called “The Cosecha Emergency Fund.” The money goes to providing aid for immigrants who were dismissed from work by striking. It funds food, rent, utilities and legal fees. On Wednesday, May 2, all the proceeds from the Hoop will be going to “The Cosecha Emergency Fund.”