On Sunday, Feb. 18, a Wellesley student had a disagreement with a Peter Pan bus driver, which resulted in the student being told to exit the vehicle in an area that was not a designated bus stop. The bus arrived at Commonwealth Ave. at approximately 6 p.m., where many students were waiting for the bus, with few available seats. Several students asked if they could sit three to a row or stand in the aisle, but the bus driver declined, claiming that it was both a legal issue and a safety issue. When a seated student continued to argue with the driver after the bus had already left the stop, he pulled over and told the student to exit the vehicle.

Wayne Crunden, the general manager of Peter Pan Bus Lines in Boston, confirmed that the bus driver acted lawfully by not allowing passengers to stand in the aisles. He cited the U.S. Department of Transportation, Federal Motor Carrier Safety Administration, Safety Regulations part 393.90, which states that passengers are not permitted to stand in buses unless the vehicle is designed specifically for standing passengers. “Peter Pan motor coaches are over-the-road buses. They are not fixed with handrails, hand straps or hand pole support systems that would designate the bus as a transit bus, which we do not operate. Therefore, it is unlawful for us to transport standing passengers,” Crunden explained.

Rebekah Albach ’20 was seated directly behind the student who was told to leave the bus. She agreed with the bus driver’s decision to not let students stand in the aisles on the grounds that he was following both national and company laws. “I felt the bus driver made acceptable decisions. Perhaps kicking the student off the bus was a bit extreme, but as a driver, I think he had the authority to do so. It wasn’t like we were in the middle of nowhere. We were only about a block from the Marlboro stop,” she explained.

Peter Eastment, the director of faculty housing and transportation, shared that he was unaware of any previous complaints against the driver who was involved. However, he did note that the driver will no longer be driving Peter Pan buses that serve Wellesley College. “I am not aware of previous complaints about this driver. The driver involved has been identified and has been placed out of service,” he stated. Both the student and the driver were unable to be reached for comment.

Reyah Spikener ’21, another student who witnessed the disagreement, sympathizes with the student who was told to get off the bus because of the safety issues that come with leaving a passenger at an undesignated bus stop. She also believes that the student was acting as an advocate for those left at the stop. “Not everyone can afford to take an Uber when they are abandoned in Boston, and she was simply trying to be a voice for those students,” she stated.

Spikener also indicated that she has experienced problems with the bus system. “The Peter Pan bus has been a problem since I set foot on campus this year. I have been left by several buses while waiting at a stop, and I’ve been at a stop where a driver let people off and refused to let me or anyone else on the bus. It never runs on time, and even when I was going home for Christmas break, I waited an hour and a half for a bus by tracking it on the Wellesley bus app before it disappeared and never came,” she said. 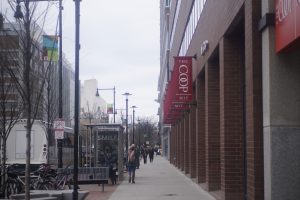 Despite changes to the infrastructure of the transportation system, students are still frustrated with the Peter Pan bus system Photo Courtesy of Lien Dao ’20 Photo Editor

This is not the first time a Peter Pan bus driver has left Wellesley students in the greater Boston area. Just two days before the Feb. 18 incident, Caitlynn Douga ’21 and three of her friends were waiting at the Harvard bus stop and trying to get on the bus, which had limited seating. Douga made it onto the bus but gave up her seat when she realized that the driver was not going to let her roommate onto the vehicle. “I heard the driver telling her [Douga’s roommate] that since three people got off, only three could get on. I hadn’t seen empty seats while I was going to the front, so I didn’t argue with him. I asked for my token back and went outside with my roommate. It was then I saw several empty seats towards the back of the bus,” she said.

Many students expressed frustration with the lack of continuity between drivers. Douga continued, “What I think is unfair is that some drivers let people stand and some don’t. There isn’t a set rule that they all follow, so they all are basically making up their own rules. I think he should have at least checked to see if there were any empty seats.”

College Government subsidiary Student Organizations and Appointments Committee (SOAC) oversees the Transportation Advisory Committee (TAC), a committee headed by Eastment that includes several student representatives. Hans Han ’18, an active member of TAC, expressed frustration over the incident that took place on Feb. 18 and also with the current state of Wellesley’s transportation system in general. Han joined TAC with the specific goal of fixing the problems surrounding the MIT Exchange and Senate Buses. However, Han revealed that there have been few opportunities this year for members of TAC to work with the administration to come up with solutions. “Unfortunately, the very first time a meeting was called by Peter Eastment last semester was during reading period—which most people could not attend, so the intended meeting arrangement fell apart. As such, TAC has not met once this entire year so far, and I have no idea what the state of the situation is,” Han explained.

Spikener believes that the incident that took place on Feb. 18 reveals a larger problem with Wellesley College’s current transportation system. “The driver is only a part of a larger problem of the Peter Pan drivers and services mistreating students and being extremely unreliable,” she said.