The mass shooting that occurred on Feb. 14 in Parkland, Fla. sent shockwaves across the nation, inspiring activism and solidarity, particularly among students. On March 14, Wellesley College faculty, staff, students and other community members participated in a 17-minute nationwide walkout in remembrance of the 17 individuals who lost their lives in the shooting. The walkout was meant to be an act of “protest [of] Congress’ inaction to do more than tweet thoughts and prayers in response to the gun violence plaguing our schools and neighborhoods,” according to the Facebook event shared amongst community members.

After news of the shooting, Beth Awano ’21, Hanna Vaughn ’21 and Carolyn Price ’21 reached out to College Government (CG) to organize the walkout. “Beth and I live on the same floor. We’re both first years. And after the events that took place, we were kind of in shock,” Price said. They questioned “[w]hy Wellesley hadn’t come out with, maybe, a stronger statement, or maybe a course of action [against gun violence.] So we decided to work together and form something so that students could pay their respects, and talk and have simply a space for reflection.”

The event drew about 200 students to the Academic Quad. The organizers asked attendees to wear maroon, silver or black, which are the school colors of Marjory Stoneman Douglas High School, and distributed small orange ribbons, which symbolized solidarity, siblinghood and demand for action. Gathered in a large circle around a patch of snow, the group listened to remarks by the organizers who explained the reason for the gathering and its significance, as well as from Tashay Campbell ’18, an alumna of Marjory Stoneman Douglas High School. 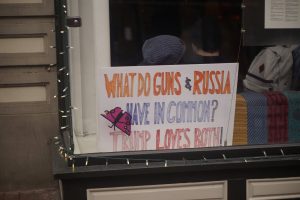 “I thought that it was really nice to see how many students showed up to show support, not just as someone who went to that high school, but as a student, to see how much we support each other here,” Campbell, who also went on to attend the March for Our Lives in San Francisco, said. “And I think that would’ve been the case even if someone from Wellesley didn’t go to that high school. So it was very powerful to see that.” Throughout all of this, Campbell said, she was supported by both her Wellesley community and her MSD alumni community, many of whom she stays in contact with.

“You would never expect a shooting or such a tragedy to happen at Stoneman Douglas, because it was such a safe environment,” Campbell said. “The teachers, administrators, staff, really did all they could to keep us safe in school,” she added. “We always had locked gates, locked doors. I think it was just someone who knew the school and took advantage of that knowledge to do something terrible.”

Price reflected on the event afterwards, saying, “I think it went really well. I was pleased with the turnout. I would’ve loved to have seen even more [attendees]. We just heard the excuse too often that like, ‘Oh, I have bio,’ or something. But students are dying.”

Following the March 14 walkout, the organizers encouraged attendees to participate in a number of events and activities hosted by other organizations on campus. In an update on the Facebook event page soon after the vigil’s conclusion, Awano provided a list of events through which students could remain active in the movement against gun violence, including letter writing to elected officials hosted by the Committee for Political and Legislative Awareness (CPLA). The Multi-Faith Vigil hosted by the Multifaith Council (MFC), Community Action Network (CAN) and Active Minds included performances, reflection, dialogue and a fair to connect community members with resources and activism opportunities. Finally, a workshop hosted by the Wellesley College Democrats taught attendees the proper steps for contacting elected officials about gun control and also served as a space for attendees to make posters for the March for Our Lives event on March 24.

The Wellesley College Democrats arranged transportation to the Boston event on March 24. On the march’s website, the organizers wrote that its mission is to “assure that no special interest group or political agenda is more critical than timely passage of legislation to effectively address the gun violence issues that are rampant in [this] country.”

Laurel Kinman ’18, Co-chair of the Wellesley College Democrats with Ivana Castro ’18, explained the significance of continuing support and action after the Parkland shooting.

“I attended the Boston march with a group of Wellesley students we organized transportation for. The walkout was the first step in the process of demanding accountability from our representatives … While it was great to see the number of people at the walkout and the march, we need to keep up the energy and to continue to advocate and to hold our elected officials accountable if we want to see change happen,” she explained.

In a statement to The Wellesley News, the Wellesley College Democrats’ Cochairs stated, “The walkout was valuable as a way for us to acknowledge and protest gun violence within the context of Wellesley [College], and was a good first step leading up to wider engagement in the marches and town halls that March for Our Lives is organizing.”

Kinman and Castro related the Parkland shooting to a much larger trend of gun violence in the US, particularly in regards to communities of color. “If you haven’t been personally affected by gun violence, understand that gun violence isn’t an issue just about mass shootings, but is a daily problem in the U.S., and one that especially impacts communities of color. Be mindful and inclusive in your activism, and give each other space to grieve and to feel trauma around an issue that hits close to home for many,” they said.

“I hope that people keep being persistent,” Campbell said. “I think a lot of times something bad like this happens, and then we forget a few days or weeks later. I really hope that people still keep pushing for change and trying to make a difference, so that in the future something like this doesn’t happen again.”