On Sunday, Oct. 14, a court case with wide-ranging implications for admissions at elite colleges began: Students for Fair Admissions v. Harvard.  Led by conservative lawyer Edward Blum, a group of plaintiffs are arguing that they were not admitted to Harvard due to the fact that they are Asian American. Blum is known for litigating other cases surrounding affirmative action — he brought Fisher v. University of Texas to the Supreme Court in 2016, in which a white woman argued that the University of Texas had unfairly denied her admission on the basis of her race. That case was decided in favor of the university. Now, Blum is bringing a similar case against Harvard — but this time, arguing not that affirmative action hurts white students, but that it hurts Asian American students. In this case, Students for Fair Admissions, the large nonprofit group Blum founded, is arguing that Harvard unfairly discriminates against Asian Americans, who comprise 22.9% of Harvard’s latest admitted class.

Last Sunday, two competing rallies were held in the Boston area. One, in Copley Square, was sponsored by the Asian American Coalition for Education, a group of Asian American parents. There, hundreds rallied in support of Students for Fair Admissions, saying that Harvard should begin implementing race-blind admissions policies. Some attending the rally held signs reading things like “Support race neutral admissions,” and “I have a dream too.”

The other rally, which supported Harvard’s upholding of affirmative action policies in admission, saw the narrative differently. They see this trial not as a way to uplift Asian Americans in the admissions process at selective institutions such as Harvard, but as an attempt to continue to give white people access to these schools at the expense of all people of color.

At Wellesley, our current Affirmative Action policy states that students are admitted “without regard to race, color, religion or national origin,” but also that the college is committed to recruiting and soliciting applications from students from underrepresented backgrounds., Therefore, no one here is admitted because of their race or in spite of their race — but students from underrepresented backgrounds are recruited more, to attempt to offset the college’s history as a predominantly white institution. As it stands now, 60 of the Wellesley student body is white.

Two Chinese-American Wellesley students, Jenn Duan ’21 and Christina Lin ’21, attended the rally in support of affirmative action, where they said there were “at least a hundred” people. Duan described the scene: “I really liked that there was a diverse group of people, and it wasn’t just Asian and Asian Americans. I saw a lot of black students, white students, Latinx students. It was very intergenerational — there were some alums, and there were also some parents there, too.” 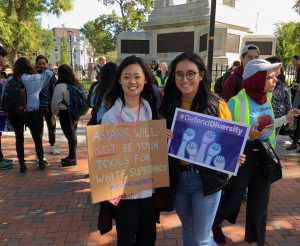 For these two students, their reasons for attending this rally related to their beliefs about justice, and to their experiences growing up Asian American. “My parents never really supported affirmative action,” said Lin. “I remember this one instance when I was younger where my mom was in this Asian parents email chain. And basically, they had rallied together to support right-wing candidates, because they were specifically against affirmative action. And they weren’t in support of them for anything but that. They did not agree with any of their other policies, they were all just rallying just to work against affirmative action.” As Lin grew older, however, her views began to differ from those of her parents. “I read a bunch of books talking about affirmative action — like “Justice” by Michael Sandel — and there’s a whole section in there talking about the reasons for and against affirmative action, and the justifications for that,” she said. “And a lot of it is to right historical wrongs that have happened, which is really important, I think.”

Since coming to Wellesley, Lin has realized that having a diverse group of students here is what makes this education special — not just the test scores of admitted students. “Especially since coming here, I’ve realized that a lot of my college experience has not always been about just the things that we’re learning in classrooms anymore,” she said. “So much of my experience in college so far has been shaped by the diverse perspectives, and people that I’ve met. I would have lost so much without that. Because realistically, you go to any college, and most of the material is more or less the same as what you could get at any institution. So I think that a diverse student body, and the diversity of thought that comes with affirmative action policies makes the whole experience better.”

Alice Li ’19, a member of Wellesley Asian Alliance (WAA) was unable to attend the rally, but sent a sign they made — reading “ASIAN AMERICANS WILL NOT BE YOUR TOOLS FOR WHITE SUPREMACY #defenddiversity” with Duan and Lin.

Li made their sign as a way of voicing support for affirmative action policies without personally attending the rally. “I think that the side of the argument that I support is that affirmative action is very, very important to give voice, give opportunity to people of color and other marginalized groups,” they said. “But I do still see the point of the other side’s argument. Like the Asian people on the other side, the Asian-Americans there, do want to be treated fairly. But they’re just going about it in like a way that they may not realize is bad.”

Duan, too, was able to see the reasoning behind Students for Fair Admissions’ argument, though she didn’t agree with them. Though her parents “aren’t very political,” she said that they would also support ending affirmative action, simply because they want the best education possible for their children, and see affirmative action as getting in the way of that. “I think a lot of these parents are in the middle-class or upper-middle-class range, and they want to help their children get into the colleges they think they deserve to get into,” she said. “But that also means they have a very minimal scope about what’s actually going on. They’re seeing, ‘this is what affirmative action is doing to us,’ but they aren’t looking at the bigger picture. I think it’s kind of sad, because they’re playing into the hands of white supremacy.”

Even though at the moment, this trial only concerns Harvard, Li believes Wellesley students should still pay attention. “[This] is still so important for Wellesley, as a place that is also a predominantly white institution,” they said. “The decisions that are made about Harvard and their systems are also ones that will carry over to everyone else that’s a quote-unquote ‘elite’ college. I think that one of the things that was also mentioned at the protest was the idea that all Asians are not the same, and I think that’s something we’re still working on at Wellesley, too.”