Several victims rights advocates and academic institutions across the country have spoken out against the proposed changes to Title IX. If implemented, the proposals would change the kinds of sexual misconduct cases colleges and universities are legally obligated to handle. The proposal narrows the definition of sexual harassment under Title IX, and only holds college and universities liable for dealing with formal complaints of sexual misconduct that take place on their campuses. Additionally, many feel that the changes would make it even more difficult for victims to come forward by requiring them to sit through live hearings where they can be cross-examined.

President Johnson was one of the many individuals who commented on the Department of Education’s proposed Title IX regulations. Johnson’s comment reads in part that she feels “a responsibility to add [her] voice to the debate” and to “stand with women — and all those who care about these issues — and speak out against sexual harassment in all its forms in higher education.” In her comment, Johnson critiqued the proposal for making it more difficult for victims to come forward, and for limiting the kinds of cases colleges and universities can handle under Title IX.

Johnson feels the proposal could discourage victims from coming forward, due in part to the full investigations and live hearings it requires colleges to hold in response to complaints of sexual misconduct. Johnson references a study sponsored by the National Academies of Science, Engineering and Medicine on the impacts of sexual misconduct in academia that she co-chaired. A key finding of the study is that Title IX reflects the false assumption that victims of sexual misconduct will immediately report the incident. That is not the case: in fact, several studies suggest that reporting rates for undergraduate and graduate students are between 2.2 percent and 7 percent.

Johnson feels that the new hurdles put in place by the proposals will further discourage victims from reporting cases of sexual misconduct. “The data is clear: Women rarely report their experiences of sexual harassment,” she wrote in her statement. “The Proposed Title IX Regulations will only serve to further discourage reporting and remedying of sexual harassment at our institutions of higher education, contrary to the purpose of Title IX.”

She recommends that the Department not require live hearings with direct cross-examinations in all cases and instead allow institutions the flexibility to put their own measures in place to ensure that all parties are treated fairly.

Johnson also criticizes the proposals for narrowing the definition of sexual harassment under Title IX and limiting the kinds of cases colleges and universities can handle. The regulations define sexual harassment as sexual assault, quid pro quo harassment and “unwelcome  conduct on the basis of sex that is so severe, pervasive and objectively offensive that it effectively denies a person equal access to the recipient’s education program or activity.” Because the harassment must occur within the victim’s “education program or activity,” colleges and universities would be unable to hold students accountable for conduct that take place off-campus or that is directed toward a student who attends another institution.

Johnson states, “As the president of a women’s college where the majority of incidents affecting our students occur off campus, I am very concerned that this unreasonable limitation heightens the vulnerability of victims who experience sexual misconduct while visiting another campus or while participating in an off-campus activity or event.”

She suggests that the Department of Education should not require colleges and universities to dismiss Title IX complaints that do not meet its narrow definition of sexual harassment or that do not take place at the student’s institution.

Johnson ended her comment by urging the Department of Education to shift its course for the sake of students at Wellesley and for all those who will be impacted by the Title IX changes; “For the women at Wellesley and for all those whose lives are and will be impacted by Title IX processes in higher education, I respectfully submit that it is essential that the Department shift its course.”

Sexual Assault Awareness for Everyone at Wellesley College speaks out

After the Department of Education released its proposed regulations to Title IX, members of SAAFE gathered to craft a group and individual comments. Vice President Lucy Carlson-Krakoff ’22 felt it was important for members of SAAFE to comment on the proposal because the federal government is legally obliged to read and respond to all of the comments that were posted during the notice and comment period.

Carlson-Krakoff said in an interview with The Wellesley News, “Leaving comments is actually a really powerful tool that not a lot of people know about. It’s a really great way to make sure your opinions get heard.” She added, “A lot of people think the Department of Education released its proposals in December because that is when a lot of college students are in finals or on break so they might not use that tool as much.”

Like President Johnson, members of SAAFE critiqued the proposal for forcing victims to sit through cross-examination, narrowing the definition of sexual harassment and not holding schools accountable for dealing with misconduct cases that occur off-campus or between students from different schools. Additionally, SAAFE expressed concern over the proposal changing the standard of evidence for determining whether someone is guilty of sexual misconduct. 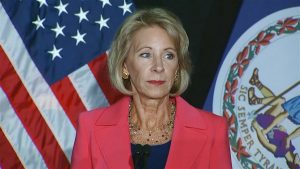 While the regulations give colleges and universities a choice in whether to use the preponderance of the evidence or the clear and convincing standard in cases of sexual misconduct, they require the standard to be the same across campus for all employees and students. Some schools have already guaranteed employees the clear and convincing evidence standard through contractual agreements that cannot be easily changed.  The regulations could thereby force some institutions to change the standard of proof they use for Title IX cases.

The Department of Education must address the comments they received on their proposed regulations to Title IX before deciding which they want to pass into law. Students with additional questions, comments or concerns about the proposed regulations can learn more on Wellesley’s Title IX page. They can also email Sonia Jurado (titleix@wellesley.edu), the College’s Title IX and 504 coordinator.