By: Alexandria Otero ’19 and Jacqueline Sánchez ’19

One of the best, and most unexpected, things about my college experience has been Bachelor Tuesday — a weekly watch party of the reality dating TV show, “The Bachelor,” with my friends.

It all began in the spring of 2018, when my roommate and I discovered that we had both started watching “The Bachelor” out of boredom during winter break — I watched in childhood, but went on a 5 year hiatus. After this revelation, we began a weekly ritual of watching the show together. One year later, we now have a solid group of people who have joined our small corner of #BachelorNation.

“The Bachelor” has been a staple of primetime television for years. I cannot remember a time when it was not on TV. The premise — 25 to 30 women compete for a proposal from a bland white man — is dated, sexist and generally problematic. Nevertheless, people cannot seem to get enough of it, myself included. Season 23’s ratings have steadily risen as Colton Underwood quests to lose his virginity and “find love” on national television, even though Colton is not especially well-liked among the “Bachelor Nation.” Why is this? Is it the highly anticipated fence jump the show has teased every single week? Possibly.

When people ask me why I like watching “The Bachelor,” I always say that it brings people together. Before college, my mom, sister and I would watch the show every Monday during dinner. I have fond memories of my family and I betting on who would “win” the dating competition. Today, it has become a routine social event in my college friend group. We now have inside jokes about the infamous “fence jump,” and attempt to guess which of Colton’s rejects will be on the summer spin-off “Bachelor in Paradise.” 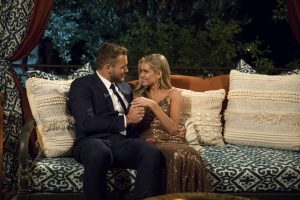 Colton and Hannah G. on a “date” Photo Courtesy of ABC

Last week, we all collectively gasped when one of the contestants, Demi, revealed her feelings to Colton only to be rebuffed by a brutal, “I appreciate that.” Every week we laugh at the petty drama between the contestants which is so far removed from our everyday lives of school, job applications and attempts at dating. Here, we can escape to a world of helicopter dates, petty cocktail parties, and “life-altering” rose ceremonies. However, once the show is over, we return to our lives grateful that we are not one of the contestants whose entire life hinges on whether or not she gets the “final rose”.

This still doesn’t explain why I am so invested in the actual content of “The Bachelor.” Writing this article, I did some research into why people like the show because I cannot explain it myself.  According to Jen Kim, a writer from Psychology Today, people are transfixed by the petty drama and seemingly shallow pain felt by the contestants. Kim writes, “As the franchise progressed over the years, what has become painfully clear is that it’s pain, not-so-much love, that sells.” I find Kim’s analysis to be extremely accurate. Whenever I talk about the show I find myself watching contestants’ petty drama. For example, when Colton cries single tears lamenting the fact that someone is “not ready for marriage” —none of the contestants, including Colton, are “ready for marriage” in my opinion — I find myself clapping my hands in excitement fully knowing drama is about to ensue. Kim further explains that drama such as the drama on “The Bachelor” has the capability to release adrenaline and dopamine chemicals into the brain. If that is the case, I am definitely addicted to the feeling “The Bachelor” gives me.

Ultimately, I like the show for many reasons. Mostly, I love the escapism and the camaraderie amongst my friends and I as we make fun of aspiring Instagram influencers using the show as a stepping stone to becoming a D-list celebrity. If it is not for you, I completely understand. There are plenty of other guilty pleasures to go around.

In a way, I am reluctant to write about my distaste for “The Bachelor.” I have always been a strong proponent of shows and books judged as “trashy,” because I’ve always taken great joy from these works. My particular poison, I’m proud to admit, has always been romance novels. No other genre can provide the mental vacation from Wellesley that I so desperately crave.

I’m a proud reader of romance novels because they have a predominantly female readership. Cisgender, heterosexual men love to undermine the genre by deeming it vapid and unsubstantial. I believe that many of these novels are far from unsubstantial and that men diminish them because they are. In many ways, calling romance novels “trash” undermine the ways in which these books have allowed me to see reflections of myself in literature — stories centered on the lives of women, very often written by women — and helped me to grow. Simply put, if you like the television show that you’re watching, or the book that you’re reading, I’m certainly not going to prevent you from continuing to enjoy it.

That being said, “The Bachelor” is certainly not the first show that I would advise you to watch, either to subvert the patriarchy or for entertainment purposes. Of course, I haven’t been able to complete an entire episode of the show in about 10 years, so perhaps I am missing the magic that comes from watching a full two-hour long episode, but somehow I think not. 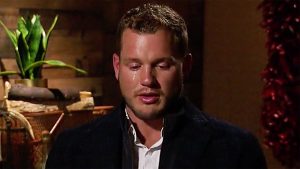 Colton cries on “The Bachelor” Photo Courtesy of ABC

I find the show absolutely boring 95 percent of the time. Watching a nearly identical group of predominantly white women fight over a white man is not something that is ever going to make my heart race.

None of the contestants are relatable to me. I don’t have ill will towards the endless parade of Laurens and Beccas that frequent the show, though I frequently have a hard time telling them apart. It makes me a little sad to see them year after year, always being traded in for women who are younger and shinier.

When these women cry as they are being asked to leave the Bachelor Mansion, unsuccessful in their quest to woo the square-jawed bachelor — and seriously, he’s always square-jawed — I feel vaguely disquieted, uncomfortable that their pain is being exploited on national television for entertainment purposes, especially considering the manipulation that goes on behind the scenes of “reality” shows like “The Bachelor.”

There is one aspect of the show that I can regard with anything other than blatant disgust, and that is that I think that women who make short term careers out of continued appearances on “The Bachelor Nation” are worth . . . definitely not lauding, but maybe acknowledging, for how they profit off of the horrible Bachelor system, walking away single and with somewhat questionable celebrity status.

At the same time, the parts of the show that are not boring are largely horrifying. Producers shipping these white people to self-described “exotic” locations for their ridiculous dates makes me want to melt into the floor with frustration. It is neither relaxing nor fun to watch these contestants appropriate other cultures for the sake of “finding love.”

The competitive aspect of the show also makes me uneasy. Watching women fight for a man, degrade each other and put each other down for his sake, will always make me melancholic. My relationships with other women are among the most important aspects of my life. Watching women compete for a bland white man whose eye color they won’t remember in ten years leaves a pit in my stomach.

Instead of watching The Bachelor, give a romance novel a try. There is a seemingly infinite supply available, and they cater to a variety of people. For the people who are watching “The Bachelor” because they’re fascinated, or even amused, by the lurching progression of love and human interaction, these books will provide a much better fit.