On Feb. 28, as part of a three day opening for the new $1 million MIT Schwarzman Computing Center ––– a college focusing on artificial intelligence (AI) development ––Former Secretary of State Henry Kissinger was part of an onstage conversation moderated by Thomas L. Friedman of The New York Times. The event focused on “Ethics in AI.” A coalition of approximately 150 students and community members, brought together by MIT Students Against War, gathered outside the event to protest Kissinger’s involvement and rallied around future demands for MIT to divest from defense contractors, who currently provide about 30 percent of the school’s funding, and are connected to many of its labs.

Wellesley student Parul Koul ’19 attended the rally against Kissinger’s speech. She said that it was about more than just Kissinger: the problem here was that the institute’s official ideas of ethics are such that a man who has been implicated in millions of deaths in Vietnam, Laos, Cambodia and Chile, among other places, could be placed on a panel on ethics. “I think anybody who says they’re trying to talk about ethics and then invites Henry Kissinger to be their speaker is worth protesting and questioning deeply,” Koul said.

“We know Kissinger is a war criminal,” graduate student Josefina Buschmann said in a speech at the rally, standing in front of a giant inflatable missile. “What does that mean to include people of such [a] background when discussing the future of AI?”

Koul, a Computer Science major who has taken classes and participated in Undergraduate Research Opportunities Programs (UROPs) at MIT, says that this welcoming of Henry Kissinger to campus is part of MIT’s long history of aligning itself with and encouraging those who profit off of war. “MIT has a long history of aligning itself with defense companies, defense industries…the U.S. military, and the U.S. government,” she said. She also mentioned MIT’s partnership with Saudi Arabia as another ethically problematic relationship. Last spring, crown prince Mohammad Bin Salman of Saudi Arabia, who is implicated in the murder of journalist Jamal Kashoggi, visited the school. “In this particular situation, they even work with repressive governments like Saudi Arabia. So I think it’s relevant to pretty much anybody with a conscience.” 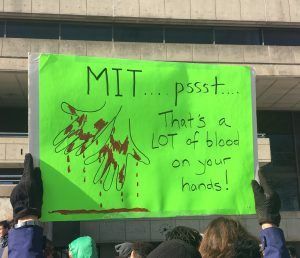 The new Schwarzman College of Computing at MIT was primarily funded by Stephen A. Schwarzman, the billionaire founder of the investment firm Blackstone. Schwarzman is a close friend of President Donald Trump, and has previously served as chair of the president’s Strategic and Policy Forum. Schwarzman donated $350 million towards the roughly $1 billion college. In addition, many attendees of the rally took issue with Schwarzman’s previous actions as a landlord – as owner of Invitation Homes, he campaigned against California Proposition Ten in 2018, which would have capped rent increases. Schwarzman spent over $7 million on this campaign.

Husayn Karimi, a senior at MIT and one of the primary organizers of the rally, said that the goal of the event was to call attention to the contradictions between the stated missions of the Schwarzman College of Computing and the places that MIT’s money goes. “Developing weapons, inviting war criminals to speak and courting billionaire, slumlord funders does not work towards this mission of considering “ethics” in our scientific work,” Karimi said. “It is our duty to show our community these contradictions, and organize ourselves to fight for something more equitable, not just here at MIT, but across the world.”

Koul said that she believes it is important for Wellesley students to take a stand on these issues. Even though they are playing out at MIT, they are connected to us – particularly for students in computer science and related fields. “Wellesley enjoys a unique relationship to MIT, especially students who are in the tech and engineering world, because we often make use of their resources, their classes, their research labs, and are in that process affected by the same dynamics that MIT students are, in that we’re being recruited to work for all of these companies that could potentially be making some very repressive or dangerous technology,” she explained.

Isha Gupta ’21 agreed. “We cross-register at MIT,” she said. “As a political science major, I personally am doing a UROP at MIT. So we definitely have a stake in what happens at MIT, and in the greater Boston area, frankly. There are so many colleges here, and every Boston-area college student has a stake in what goes on in our academic sphere. I think that if Henry Kissinger is still being invited by administrations to come and talk, students – no matter which university they go to – should protest. Because it sets that precedent that other administrations can do the same, and get away with it.”

MIT Students Against War has issued a list of demands to the university, which they will continue to push for over the coming months. First of all, they are demanding that no money connected with the defense industry or the prison-industrial complex be used to fund the new College of Computing. Secondly, they are demanding that Dan Huttenlocher’s appointment as Dean of the new College be rescinded, as he is on Amazon’s Board of Directors, which the student activists believe to be a conflict of interest. In direct relation to Kissinger’s speech, Students Against War demands that “ MIT issue a public apology to the MIT community and to the people of Laos, Cambodia, Chile, Argentina, Bangladesh and Vietnam for whitewashing Henry Kissinger’s genocidal legacy by inviting him to speak,” and that MIT take steps towards greater transparency and student input in how its funds are spent.

Karimi says that though this rally was “a victory,” it is not the end of the struggle to detach MIT from its legacy of supporting war. Sometime in the upcoming weeks, Students Against War hopes to hold a mass meeting to plan future actions.

“We hope that MIT takes the demands in our petition seriously,” Karimi stated. “We want more democracy in these large decisions that MIT makes. We want more student, faculty, staff and community oversight over these under the table billion dollar deals. That is not democracy, and that shows a serious flaw with how MIT makes decisions. We want MIT to appoint a new dean that is not on the board of any tech giant or defense-affiliated institution. These would be successes. But of course, successes are also bringing out 150 students to this demonstration and building political consciousness on campus. Demands are not so easy to win when you only have 10 people believing in them. This is the task we are taking on now.”