Wellesley’s Karate team, officially known as the Wellesley College Shotokan Karate Club, recently had a strong performance in competitions against other schools. Most recently, on Feb. 27, Karate Club members Alina Zheng ’23, Amy Liu ’22 and instructor Amandine Fromont ’17 placed first in the beginner, middle and advanced divisions of their tournament, respectively. Additionally, Hanamei Shao ’21 and Ayusha Ariana ’22 placed in the top three in their divisions.

The club belongs to the North American Collegiate Karate Conference (NACKC) and currently competes against Harvard University and Boston University. It was started by a group of students and alumnae during the 2017-18 school year. 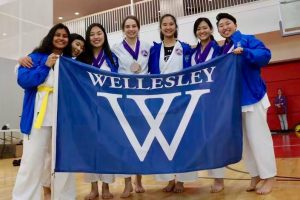 “[After graduating], I trained at the MIT club for a little while, and working with some friends there and some friends who were still on campus, we decided to try and open a club at Wellesley,” Fromont said. “Since then, friends on campus have been doing a fantastic job of taking care of the club and building it up.”

The team is coached by several karate instructors, including Fromont, who also competes in tournaments. Karate Club teaches “kata,” which are different sequences of karate techniques. During their Jan. 30 tournament, “Heian kata” was at the center of their performance, while “Sentei kata” was the focus at their Feb. 27 tournament. According to Shao, “heian” translates to “peace of mind,” and “Heian kata” focuses on fundamental skills. “Sentei kata” are at a more advanced level — the term means “selection.” At their most recent tournament, each student chose one form to perform at the competition.

As with many Wellesley activities, Karate Club moved their events online this school year. Tournaments and practices are held through video conferencing. The club even held promotions in the fall, in which karate members performed in order to receive a higher level belt.

“I’ve made more personal strides in karate for the last year, on my own, being able to work on Zoom, than I would have expected,” Shao said. “If anything, because we have Zoom practices, we can now have practices with other clubs, all the time. And that’s been really nice.”

Since tournaments are being held completely online, Karate Club members performed with only each other and their competitors as an audience. 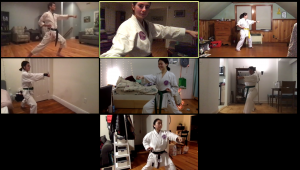 “In the beginning, at my first tournament, it was a little nerve wracking because I’ve never had to perform kata on zoom before,” Ariana said. “There’s a lot of things you have to think about, like camera angle and lighting and just making sure all of your body is in the frame.”

The nervousness wore off, however, by the next tournament.

“It was really nice to just have something to look forward to and then empty my mind and just perform,” Ariana said.

Many Wellesley Karate members expressed the ways their club helps them connect with a community. Shao remarked that the club is a different atmosphere from one of their other main activities, Fencing, which is a DIII sport at Wellesley.

“The dynamic with club sports — and karate in general — is very different from varsity athletics,” Shao said. “We have such a sense of family and such a sense of personal purpose that it’s really fulfilling to focus on yourself and focus on doing something that we enjoy, that we have fun doing, that we goof off with sometimes.”

Ariana mentioned that group bonding events, such as team dinners, especially helped her grow closer with the community in her first year. Additionally, Fromont added that Karate Club helps her stay connected with Wellesley even as an alumna.

“I loved my time at Wellesley as a student,” Fromont said. “So when I had this chance to help create […] a sponsored activity that I loved, on campus, I kind of jumped at the chance because it’s such a beautiful opportunity for me to share something I really love with people who I know are amazing.”

Ariana added that for her, one of the most important aspects of Karate Club is the physical and mental health benefits. During COVID-19 lockdown, it gave her a sense of routine.

“It’s very easy to get lost in your thoughts and/or your anxieties and stresses, and karate kind of gives me a space to breathe and just not think about anything else,” Ariana said. “I really will say it kept me sane during this time.”

Overall, Karate Club members hope to get the word out about their organization.

The team’s next tournament is scheduled for Mar. 27.