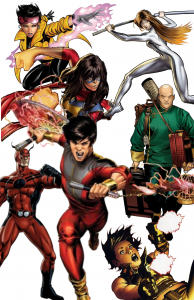 Many Asian Marvel comic characters have yet to be adapted to the big screen, a few of which can be seen here. Graphic courtesy of Grace Fang ’23 and Marvel

I am Indian American and Muslim. Am I Asian to you?

Honestly, I’m barely Asian to myself. I think of myself as Indian first, but when people say “Asian,” it always takes me a second to realize, “Oh, that’s me, too.” “Asian” is a label that I did not think applied to me. But over time, it started to nag at me when people referred to Asians but didn’t mean my Asian.

This has been especially true for the conversations around “Shang-Chi and the Legend of the Ten Rings” and what the film does for Asian representation on-screen. “Shang-Chi” is being heralded as a groundbreaking win for Asian Americans’ representation, and it is. This is the first Marvel film with an Asian American lead, and not only is he Asian, he’s a superhero. He’s not the typical Asian, the awkward nerd. He’s strong and confident and refreshingly witty.

So it is absolutely valid to say that “Shang-Chi” is a win for representation, since the movie helps us break out of stereotypes that have stuck around for far too long. Many people have also lauded “Shang-Chi” as a welcome opportunity for celebration of their culture, especially in the wake of anti-Asian hate during the pandemic.

Stop AAPI Hate reported more than 9,000 hate incidents from March 2020 to June 2021. This wave of hatred and harassment has taken a toll on many Asian Americans’ mental health as well, especially after incidents like the shootings in Atlanta on March 16, 2021, where eight people, six of which were Asian women, were killed.

But that hate was directed to a specific kind of Asian American. Not the ones who look like me. Of course Shang-Chi is going to be a welcome change from how horribly they have been treated, but it’s not for all Asians. And it shouldn’t have to be.

Although the conversation surrounding “Shang-Chi” left something to be desired, the film certainly did not. “Shang-Chi” followed its titular character (played by Simu Liu) and his reluctant journey home to his estranged father, who trained him to be a ruthless killer, along with some nail-biting action scenes and fantastical visuals (there’s a dragon).

Personally, I think the film was one of Marvel’s best. There was a healthy balance between the fast-paced action and the emotional story of the family’s grief for Jiang Li, and how it impacted them all, even driving Wenwu, a calculating warlord, to near-insanity in his denial of her death. A stand-out in the film for me was Shang-Chi’s sister, Xialing (Meng’er Zhang), who built her own fighting ring and empire after realizing that her father was not going to look at her with the same pride as he did his son. The film also draws on Chinese mythology and traditions. Shang-Chi and most of the main cast often switch between Mandarin and English with an ease that many of us who are between two cultures will understand.

There are definitely moments and emotions that I relate to in the movie. The nosy relatives, the expectations of our families to make something of ourselves, and even the practice of taking our shoes off before entering the house. But this film was not meant for me, it was meant for those who will look at Shang-Chi and see themselves. That can include Chinese Americans, East Asian Americans and Southeast Asian Americans, too.

Time and time again, people have used the phrase “Asians are not a monolith.” Asia is the most populous continent and consists of 49 countries with so many different cultures, languages and people. Technically, the Middle East is West Asia. I don’t know if there are any Arab or Middle Eastern people who feel necessarily represented by “Shang-Chi.” And that’s ok.

“Shang-Chi” is a win for Asian representation, simply because of the scarcity of Asian stories on screen in the first place. The entire Asian American community, numbering more than 20 million, is so starved for stories of our own that we herald a movie that is targeted to a specific kind of Asian as a step forward for all of us.

There are, however, caveats to how this film contributes to representation of the Asian American community. Awkwafina, who plays Katy, has been accused of appropriating Black culture through speaking with a “blaccent.” Simu Liu has also skirted controversy recently, with screenshots of his alleged old Reddit posts circulating online. In 2020, he faced criticism for deleting a tweet from 2018 expressing concern about Mark Wahlberg, a fellow actor, for asking courts to grant him a pardon after having been found guilty for violating the civil rights of three Black children in 1986. Liu deleted the tweet, and subsequently, news broke of his new project: a film titled Arthur the King, also starring Mark Wahlberg.

Indian Americans are the second-largest group in the Asian American community. Kunal Dudhekar, an Indian American actor, plays John in the movie, one of Katy and Shang-Chi’s friends who appears in two scenes of a two-hour long movie.

But more representation for different kinds of Asians, especially South Asians, is on the way. Marvel’s next film, “Eternals,” will star Kumail Nanjiani, as a superhero himself. On Disney+, Ms. Marvel, a series about the titular superhero, a Pakistani American Muslim teenager, will be coming soon too.

Shang-Chi is groundbreaking, to an extent. There will be many Asian Americans who see themselves in his story, and they deserve it. But it is not for all of us, and it shouldn’t have to be.

After all, Asian Americans are not a monolith.