When walking down the Tower steps towards Lake Waban, the original columns of College Hall can be seen. College Hall, Wellesley’s previous version of Tower Court, was both a living area and an academic building, hosting more of the College’s life than Tower Court does today. However, on March 17, 1914, College Hall caught on fire and burned down. Professor Martha Hale Shackard, class of 1896,  a contributor to The Wellesley News at the time of the fire, described the fire as:

“Tongues of flames that had been creeping around the ceilings and walls, curling in and out of the balustrades of the staircases, leaped into tempestuous waves.”

No one was hurt, and all of the students were able to escape the burning College Hall. Following the fire, construction began on what is now known as Tower Court. As new construction took place, however, parts of the lives of the Wellesley students of 1914 were buried underground.

Through the restart of her excavations with her archeology classes, Professor Elizabeth Minor is working to uncover these clues about life at Wellesley College in 1914 . This is not the first year of these excavations — previous excavations had to stop due to the COVID-19 pandemic. However, the excavations are back in full swing this fall, looking deeper into the history of the College.

From Professor Minor’s perspective, the reason for holding these excavations is twofold. First, these excavations serve as a way for students to learn more about the College that came before them. With College Hall hosting both dorms and classrooms, these excavations are able to explore the personal lives of students in 1914 as well as their academic lives, with clues linking to academic rigor among other facets of academic life at Wellesley. Professor Minor noted the enthusiasm of the students excited to learn more about the history of Wellesley College and what it was like to be a student over a century ago. 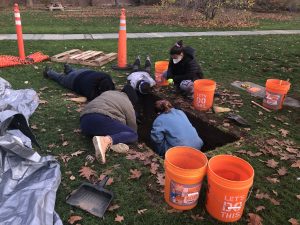 Secondly, Professor Minor took on this project to create more access to archeological projects for students. She highlighted the inaccessibility of working on a site, with it being both expensive and hard to physically access. This project works to overturn that barrier. By offering this project as a part of Wellesley courses, students are able to work at an archeological site without having to pay or travel. The locality of this project makes the finds more meaningful, letting students gain experience on an archaeological site while learning about the history of their school.

This current round of excavation will conclude shortly due to the ground freezing. While the original completion date was November 16th, it is now subject to change based on weather patterns. Students participating in the two courses will be working to make the findings of these excavations available to the public through a variety of means. Initially, students will be handing out “miniature dig kits” across campus so that other people have a chance at participating in archaeological excavations of their own. Some students are working to create flyers that will be posted across campus with their findings from this dig. Professor Minor says that the eventual goal is to publish the findings in an academic journal, but due to the length of that project, the students are working towards more short-term ways to share the results.

Although there is no more space to join the excavation this fall, Professor Minor is willing to answer any questions about this project via email. The excavation of College Hall is an exciting project to be reintroduced to the Wellesley community, as it sheds light on the past and provides a starting point for future archeologists.